The Return of the Gent

At the start of 2017, one of the remaining box-tombs at St Nicholas Rest Garden collapsed. The council Parks department needed to take swift action to make the monument safe, and removed the brick pier and inscripted side pieces and lowered the capstone to ground level. 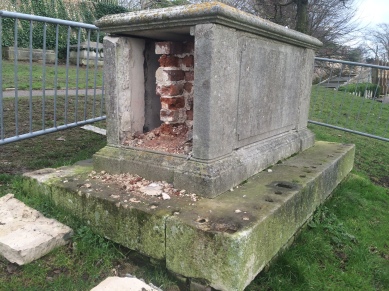 It was a sad start to the year, and – we thought – marked a further loss to our archive and heritage. The council – although it manages most of the burial sites in the city – does not have the resources for maintenance of this kind, or the responsibility, as properly the monument remains in the care of the descendants of those remembered. And – especially for older monuments, these are hard to find.

But…sometimes they are. And sometimes they will rise to the occasion and come together to preserve the memory of their ancestor – and with Edward Gillett, such was the case.

Long residing in other parts of the globe, the Gillett family were contacted and agreed to fund this handsome restoration of the monument to Edward Gillett, revealing clearly the inscription on the south facing side which had not been previously transcribed which commences “EDWARD GILLETT Gent”.

Thanks extended to the Gillett family for taking this action which preserves a part of their own family heritage, as well as  helping to protect the living library of our dear departed which is the St Nicholas Grounds.

This entry was posted in Rest Garden, St Nicholas. Bookmark the permalink.