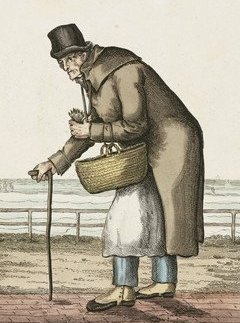 Born in 1756, John Standing commenced  working life as a bricklayer in his native Hurstpierpoint. Misfortune struck in his 30’s when he fell from a scaffold, severely injuring his spine. His thumb was also broken and reversed and he lost one eye. With these injuries, he was unable to resume his former employment and – with his wife, engaged in the manufacture and sale of matches.

With stiff competition from Gypsy families plying this trade in the villages around his home, Standing and his wife established themselves at Brighton where John became a well recognised character. Know locally as ‘Old Rosemary Lane’ after the particular trade call which he adopted, Ackerson Erredge reports that “his injured bodily condition and the novelty of his ditty obtained him a good trade…and many regular customers.” It is likely that his “lame, blind and aged condition excited sympathy amongst strangers, who rather gave to him than purchased of him”

Matchmaking was an extremely hazardous occupation. The white phosphorus used was highly toxic, leading to Phossy Jaw and bone disorders, failure of organs and brain damage. Standings wife, who managed the manufacture of their stock was vulnerable to the affects of her produce, as well as the extreme rigours of her harsh life. Working through the bitter cold, frostbite caused amputation of one leg and the removal of most of her toes from the other, and she also lost use of one eye in an accident.

Despite such hardship, the strength and resilience of the couple saw them plying their trade at Brighton for forty years, but in January 1833, John Standing was taken ill, passing away on February 9th. His wife survived him by just three days.

The couple were buried in the ancient ground at the expense of the parish.

This entry was posted in Churchyard, Missing Monuments, St Nicholas. Bookmark the permalink.