A & AH Wilds and the Ups and Downs of Life 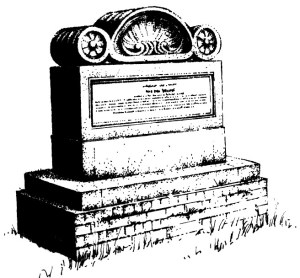 Amon Wilds arrived at Brighton from Lewes in 1815. With his son Amon Henry and partner Charles Busby he established a ‘builder/architects practice which significantly shaped Brighton and Hove at a time of unprecedented growth. The collected works of A & H Wilds and Busby include four squares, four crescents, nine terraces, six streets, five churches and a large number of individual private houses.

Wilds senior died aged 71 and is remembered by a handsome tomb in the churchyard designed by his son Amon Henry. It is easily found because of the prominent shell motif – the ammonite – which became a trademark of the Wilds practice and can be found on many of the buildings they created.  He was survived by his second wife Ann who later married Thomas Hunter. Both Ann, and Sarah his first wife, are buried with him in the churchyard. The inscription reads:

Sacred to the memory of Mr AMON WILDS. Died September 12th 1833 aged 71 years. A remarkable incident accompanies the period in which this gentleman came to settle in Brighton. Through his abilities and taste the order of the ancient architecture of buildings in Brighton may be dated to have changed from its antiquated simplicity and rusticity and its improvements have since progressively increased. He was a man of extensive genius and talent and in his reputation for uprightness of conduct could only meet its parallel. Sacred to the memory of Mrs SARAH wife of MR AMON WILDS who departed this life February 3rd 1822 aged 37 years. ANN HUNTER relict of  AMON WILDS,  wife of THOMAS HUNTER died May 19th 1867 aged 80 years

Following the death of his father,  Amon Henry continued his practice in Brighton. Aside from his many architectural and landscape achievements, he served as a Town Commissioner and also invented a device for cleaning horizontal chimneys, replacing the boys who typically worked at this task. By around 1850 Amon Henry Wilds had left Brighton for Shoreham where he spent the rest of his days in a small cottage which he built overlooking the river Adur.

Amon Henry Wilds had one daughter – Sarah Ann – who married Captain Edward Sellon in 1844.  The story of Captain Sellon reads as copybook Victorian rake and roué; in 1836 he was arrested for “scandalous and infamous behaviour, unbecoming the character of an officer and a gentleman” which involved insulting and assaulting senior officers. He was   discharged from military service and is subsequently believed to have found employ as; a wine merchant, a fencing instructor and a stagecoach driver before settling into the career of writer and illustrator of erotica and anthropological texts, which remain in print to the present day

He married Sarah Ann Wilds in 1844, but finding her not as wealthy as he had been led to believe he left her to live in London. Sarah Ann eventually joined him but by this time Sellon had established one mistress and had seduced a teenage parlour maid. Sarah Ann left him once more and so began a pattern of reconciliation marred by evidence of his numerous affairs which was to continue for the remainder of their lives.

The couple had four children – their first, Guillemina, did not reach her first year, and was buried in the Rest Garden although the location of her grave is not now known. Their remaining children survived and thrived, with William becoming a Landscape Artist; Ernest a Lecturer in Botany and Marmaduke a Roman Catholic priest.

Sarah Ann Sellon died on 15 April 1866 in New Shoreham, aged 48. Her death certificate gave the cause of death as “vomiting a week, convulsions 3 days, coma 12 hours”.  Edward died two days after Sarah Ann on the 17 April 1866. Cause of death: “Pistol shot in the side, suicide when insane, found dead”.

Much of the information provided above has been drawn from the work of Brighton Historian Lavender Jones who carried out detailed research on the life of AH Wilds and the Sellons. Considering the unhappy fate of Sarah Ann and Edward Sellon she speculates on the role which Sellon may have taken:

“But what of Sarah Ann? Could her death have been caused by poison? The symptoms seem to indicate this was a possibility. Was Sellon so distraught by her death or so consumed with guilt for his actions that he shot himself, whilst his mind was disturbed?”

Descendents of Sellon admit this as a possibility, but – as with many tales which surround the ancient ground – the passage of time has removed the likelihood of certainty either way.