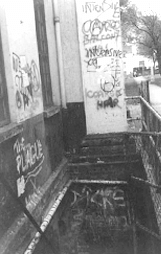 Alike to similar spaces, those remembered at Hanover Chapel grounds have seen disruption – in 1845 a part of the burial ground was paved to be come Queens Road and in 1949 the headstones and monumental pieces were moved to the perimeter walls. But events at the close of the 1970’s – if the dead could indeed be waked – may have tempted a few to set abroad in search of a quieter rest.

The Hall was used as a community resource centre and the basement – known as The Vault – a rehearsal and performance space. As the venue became busier, more parts of the basement were explored and put into use, including the labyrinth of Victorian Crypts and underground tombs which spread beneath the Churchyard.

Punk Poet Attila the Stockbroker was involved. At the Punk History of Brighton website, he comments:

“There was a developing problem. Before the punks had been let loose there, walls had been constructed in front of the actual burial chambers: the vibrations from rehearsals and gigs, plus general vandalism, caused breaches in them, and pretty soon skulls, bones and bits of coffin started turning up….Eventually, with skeletons quite literally coming out of the closet all the time, as it were, things got too much: the local council took action and the Vault’s doors closed for good.”

A fire destroyed the Resource Centre in 1980 and a roof collapse in 1981 led to a full excavation of the underground Crypts. Some 500 coffins were discovered and these were disinterred and reburied at the Lawns Cemetery in Woodingdean.

This entry was posted in Hanover Chapel. Bookmark the permalink.