When Amon Henry Wilds approached to the parish to get the contract for designing the Rest Garden which was opened in 1841, he offered a grand vision, and the most eye-catching feature was the pyramid at the west of the ground.

It was never built so we cannot be sure, but in all likelihood it was not simply an architectural feature, but inspired by plans for the – equally unbuilt – ‘Sky Cemetery’ which was proposed by Thomas Wilson for a site at Primrose Hill North London. 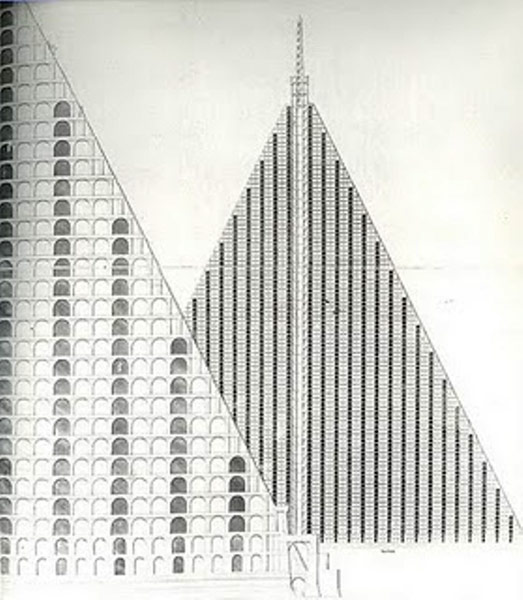 The scale of Wilson’s proposal was immense, higher than St. Paul’s Cathedral and with space for 5 million coffins at a price of £50 per vault it might also have proven attractive for investors wishing to turn a profit from death.

The Wilds pyramid might have been on a more realisable scale, but considering that the Rest Garden closed after 15 or so years operation, leaving the 13 completed raised vaults barely tenanted, it was probably for the best – financialy at least – that this element never made it off the drawing board.

This entry was posted in Architect, Rest Garden, St Nicholas. Bookmark the permalink.