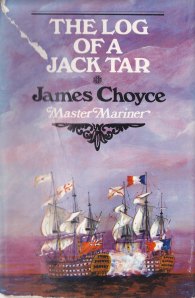 “This tale of my adventures, and of my many hardships when a prisoner to the Spaniards in South America, and likewise how I was marched from one end of France to another chained like a wild beast, and treated worse than ever a bear that is taken about the country to be baited for the amusement of the people, may prove both of interest and advantage to those who may read it”

So concludes the autobiographical novel ‘Log of a Jack Tar; The Life of James Choyce Master Mariner’. Originally from Finchley, Choyce embarked on a life of adventure and gives a fine account of campaigning in the Napoleonic era: Choyce was captured by the Spanish off Chile, escaped five times and recaptured four, managed to join an English frigate, was captured by a French privateer while on a whaling voyage, escaped, was recaptured, and imprisoned at Verdun, “tired of loyalty” and put himself at the service of the French, deserted and joined an English warship, deserted again, and lived to encounter pirates at Juan Fernandez.

In 1822 he retired from the sea and settled in Brighton. Not a long retirement, he died in 1836 and was buried at St Nicholas. His story would have died with him, except that many years later a manuscript came to light;

“…it is unpaged; and the volume looks as if he had bound up the MS in a rough sailor fashion himself with stout string. The pages are packed between two pieces of millboard joined together by a piece of yellow canvas. The manuscript lay hidden away in a lodging house cupboard at Brighton till it was shown by the landlady as a curiosity to a friend of the publisher”

Choyce’s book was first published in 1891, more than 50 years after his death. Had it been published during his lifetime it would have been heralded as one of the first such narrative accounts of an Englishman’s experiences in South America. The book was reprinted in 1973.

Among the other treasures shown at the boarding house were; a telescope and box of old charts, a model of a whaleboat which he made and two cannons carved from whalebone. The whereabouts of these items is not now known. Landladies, please check your cupboards.